I was moving my photo albums around this week, when by accident a picture of my best friend in high school, Matt, fell out.

I must have taken the picture sometime in 1982 or 1983. He finished high school early, with a GED, to immediately pursue an auto mechanics program in St. Louis. When I las saw him at his wedding in the mid-1980s, he had gone on to a career in that field.

The picture shows the guy I remember well and still respect. He was looking macho, wearing a smile.

Matt never seemed mad. He always had a positive attitude. He was born cool and did not need to have his badass status affirmed by the limited social world of my high school. Let’s face it, some people simply are born to be a little wild, and stand out from a crowd.

Matt worked his ass off at a tire retailer, making more money than me. With his savings, he paid for a 1969 black and red Camaro Z, a V8 hot rod he fixed up for speed and show. You cannot be more cool when you are 17 than having one of these cars. When Matt hit the gas in neutral, the engine roared and heads turned. He also paid for his own Triumph motorcycle with a beautiful blue trim. Both the car and bike could fly, and he loved speed.

The more mature and beautiful young women our age fell for Matt—something they told me years laters—but he didn’t pay attention to them. He had been dating his sweetheart from a different city since he was in the seventh grade.

Matt and I played soccer together on our high school’s soccer team our junior and senior years. He was stronger, more athletic than me, playing a center fullback position, holding up our defense with grit, speed, and power.

Matt learned how to play in Brazil, where his mother took him kicking and screaming when he was in the seventh grade. She saw him going wild at that age. As a teacher committed to social causes, she wanted to expose her only son to the third world and a life outside of urban St. Louis and clean him up from the many influences of drugs that surrounded all of us then. It worked. I wish I could have done the same.

He told me about clearing fields of sugar cane in the blazing sun at a village near Brasilia, where he and some other Americans were living and helping residents for a year.

After Brazil, Matt totally changed. I have never seen anything like it up to that point. Most young men, like me, at that age are immature. Matt had already become a man, he was clear about what he wanted to do (auto mechanics), and he achieved his goals with hard work.

Matt could deal with anyone from any race or culture. I never once saw any of the bad boys at our majority black high school try to test and taunt him with threats of violence—something that happened a lot. Some of that was racially motivated, and a good part was about establishing the male pecking order. Matt had street cred, and in that world, it was the currency that mattered. Matt was a different kind of dude. He had respect.

I never knew why Matt spent time with me. He was a shop guy, a genius at auto mechanics, and I was trying to be a serious, nerdy student going to college. Maybe we got along well because both of us had divorced single mothers as parents who had fathers who had left our families in bad circumstances. And we both had cleaned up from the dope scene at the same time too, when many of our peers were just starting to do drugs. We had replaced those vices with soccer and jobs. Maybe we had moved on already before we had left that school.

Sadly, I lost touch with him midway through my college degree. I left for Portland in 1983. He was married by the time he was 21. I never came back to St. Louis, except for occasional holidays. None of the few people I stayed in touch with from my high school knew where he went. I think Matt left that world behind, bought an auto garage, and became a business owner while raising a family.

Every year or two I try to find him. He has stayed off the grid or has already passed away. I don’t know.

However, Matt’s memory lives on. On a list I made of all of the mentors who influenced me, my old friend sits near the top of the list. His year in Brazil made me want to find places outside of the United States where life was more raw and more real than suburban St. Louis. Most of all he showed me that authenticity can never be faked. When you show up real, people will treat you accordingly.

Matt, wherever you are, if you are still with us, I wish you the best.

Surfing is as much an art form as it is a way of life and beautiful sport.

I truly believe that new ideas and inspiration happen for a reason. The trick is to recognize when your thinking and interests turn a new direction. Great creative minds have often worked that way. Robert Greene’s book Mastery beautifully documents this. It’s a study of the creative process and the mastery of skills. He shows how these changes emerge and how accomplished persons, past and present, responded to those vicissitudes.

I recently had breakfast with an old friend of mine, whose father is one of the premiere avant-garde artists from Taiwan known as the Blue Moon Group. My friend said his father was constantly changing and exploring new ideas. I think this is true of successful people in any field–and unsuccessful people who aren’t recognized by their peers.

I am feeling a lot of changes lately, relating to the ocean, my response to circumstances in life, and my lifelong passion for combining physical activity with seeking contemplative spaces to find that quintessential balance in life. Surfing lately has been a space that makes sense right now. I am not questioning it. I am listening to the muse. I am seeking out its siren call. So far I have been richly rewarded, including new friendships and perspectives.

This shot was taken two years ago in Leucadia, in San Diego County. It was an epic trip that combined major breakthroughs with my first serious foray into surfing as a way of life. I do not think that was an accident. Hoping you all catch your wave and take it for a ride. 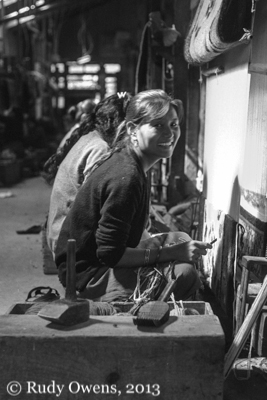 This contagiously positive carpet weaver is among the many Tibetan refugees I met in India at Dharamsala and Darjeeling, two hill stations.

Recently, I had two experiences over a couple of days during which I realized I was not trusted. It saddened me. Trust is almost always earned, but it also is very dependent on one’s own life’s story and circumstance, so some do not give it easily. Trust is one of the greatest treasures. It is a gift we give to young people to show we believe in them. It is also something that one has to demonstrate in life, and not be afraid of the consequences.

My experiences made me think of times I relied on blind trust. One of the most vulnerable moments I had traveling in India in 1989 took place in the middle of a late November night, in Dharamsala, the Indian hill town that is also refuge to the Dalai Lama and many Tibetan refugees. I had arrived very late at the lower city of McLeod Ganj after 12 hours of bus rides. As there were no taxis, I walked up the hill, in the dark, having no reservations. It was 1:45 a.m. when I finally arrived sweaty on the cold hill city, but found all the hotels were shuttered. It was not particularly safe to be on the streets, and I had to find shelter.

So, I visited a tea stall restaurant, owned by a Tibetan man in his 50s. He was awake, making bread and cooking. I motioned I needed a place to sleep in his restaurant. I was likely dirty, a bit smelly, carrying a big backpack, and not the most welcoming of sights. He did not know me. Here’s what I wrote in my journal: “Imagine this. A total stranger appears at his doorstep at 2 a.m. and he lets him in to sleep at no cost. I pulled out my sleeping bag and crashed for 4.5 hours. I woke up to the sounds of my friendly patron saint bustling in the kitchen. I wonder if he sleeps. He smiled at me and gave me a cup of tea.”