I love great acting. A good actor or troupe of actors can make things accessible that are scary, complex, or just distant. They become real through good art. 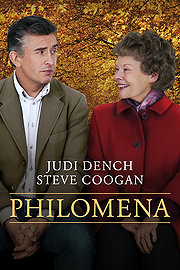 Dame Judi Dench stars as the main character, Philomena Lee, an Irish woman searching for her son given up for adoption.

I found this to be true with the highly acclaimed 2013 film Philomena, starring Dame Judi Dench and Steve Coogan. The film portrays, in brutally painful terms, how a Catholic-run adoption system in Ireland forced young pregnant girls, usually orphans or wards of Catholic homes, to give up their kids, who were sold to wealthy American parents. The film alludes to young mothers who died in childbirth, and their kids, at these places—a national scandal in Ireland to this day.

Watching the film, one really feels for these young girls and the heartache they had giving up their young children. The pain they feel is, as is the case of the main character, Philomena Lee, a lifelong loss. The film begins with her pain thinking of her son on his 50th birthday. Fate pairs her with a journalist, Coogan’s Martin Sixsmith character, and they embark on a journey of discovery.

As an adult adoptee, naturally I become curious, what was the “system” that my birth mother found herself in during the 1960s? Who was helping her? What were her support networks? Who were all these other actors who made this work? I started Googling the name of my birthplace, Crittenton General Hospital in Detroit, Mich. This hospital apparently has been torn down and moved. I also discovered it was part of a national philanthropic organization started in the late 1800s to help unwed mothers, known by many as the Florence Crittenton Home for Unwed Mothers.

Dr. Kate Waller Barrret is one of the co-founders of the Florence Crittenton Homes for Unwed Mothers (courtesy of Wikipedia).

How the Philomena system worked in the United States

A number of online bulletin boards have allowed adult adoptees to swap information, including for this organization and the hospital where I was born. These queries stretch over many years, and it appears there were many of us.

A Facebook page was created that is devoted to these homes nationally and larger issues of accessing records. Comments on that Facebook page call these homes the American equivalent of the one portrayed in Philomena.

The creator of that page also created the Florence Crittenton Home Reunion Registry, and I found her story touching.

The “about us” page for the registry notes: “Before society had accepted pregnancy outside of marriage, my birth mother age 18, became pregnant while in nursing school. Her mother was not around and had left the family to get jobs where ever she could to live. Part of my Birth Mother’s life was raised in an orphanage after her father had died in the coal mines. Times were extremely hard and she had no place to turn.”

As an adult adoptee who has now known about his birth ancestry more than 25 years, I continue to discover new things about the past. Today’s discovery illuminated just how many people came together as part of these hard stories, particularly for birth mothers. There were doctors, nurses, social workers (in a weird role as baby brokers), families, and the mostly hidden and also central figures, the father of “illegitimate” children.

Like the system portrayed in the film Philomena, this country had social and child adoption networks and maternal care systems operating largely under the radar because of social norms around illegitimacy, sex, birth control, and more. All of these people operated with the prevailing culture and social values of the time, which promoted secrecy and, for many, shame. A major outcome of this shame-based system was having multiple parties, from the state of Michigan to social service agencies, deny giving identity information to adult adoptees like me. I, like many others, had to spend years and many resources tracking down information to what we are entitled to as a human right—to know who we are.

Years later, the mothers and kids have revisited these past times and the systems with different values, and the story looks vastly different. In the end, this is a story that matters not just for those who were a part of this large and nationwide network. The film Philomena shows that these stories are tales about love, about loss, about life, about connection, and about identity. These are universal stories, accessible to all of us. 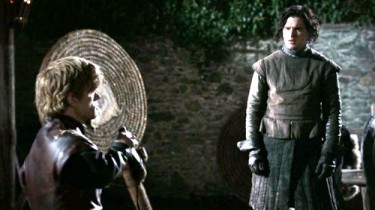 This image, published by web site FanPop, captures one of the best moments of dialogue in the whole bloody saga that is Game of Thrones. This is the first episode, season one, when the two characters meet. I like both characters shown here a lot.

As an adoptee, I have great affection for all characters, mythical, imaginary, and historical, who share my status as a man who was born without his biological parents joined in marriage. The word for us, through history, is “bastard.” Don’t worry, fair readers, us bastards are comfortable with the word. We know its true meaning and know how others respond to it. It may be you who is not at ease with the word and the reality.

So it may be no surprise that one of my favorite little scenes from the series Game of Thrones is when the Imp, Tyrion Lannister, gives advice to the main bastard character of the series, Jon Snow.

“Let me give you some advice, bastard,” says a drunken Tyrion. “Never forget who you are. The rest of the world will not. Wear it like armor.”

In other words, make your apparent weakness your strength and own the fullness of your identity, regardless of what anyone may say. Good advice for a bastard. I should know. And so should Jon Snow.