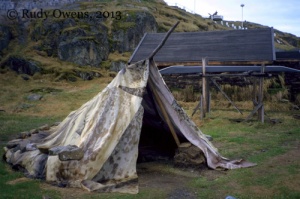 For three summers in a row, I visited Greenland. I was completely enamored with the place, its people, its natural history, and the wisdom of its long-time Greenlandic residents.

I read every book about Greenland I could get my hands on during that time, from 1998 to 2000. One was Peter Freuchen’s Book of the Eskimos. The collection of stories covers the Danish explorer’s times in Greenland starting in the early 1900s. He lived among the native Greenlanders, married a local woman, and became an observer of their culture, even with infrequent heavy Western filters.

I wrote down a quote I read from this book when I was in Greenland. It provides a perspective from his Greenlandic mother-in-law, who helped him understand why the elders did not yell at the children for damaging their seal-skin pants while sliding on rocks.

A mother and her young son share a fun moment on a ferry in southwest Greenland.

“Yes, but you see, nobody can help thinking by seeing this foolishness, children ruin things without giving it a thought, they have no cares. But every day of their lives they become wiser and wiser. Soon the time will come when they will never do that sort of thing. They will remember their unnecessary wear on their pants and regret it. Everyone must rejoice by recalling that we start out as thoughtless children, but with every day the good sense increases in us. At last we become old and sage. Just imagine if it were the other way around, so that we were born clever and economical, and our wisdom decreased with time. Then misfortune would dwell with people! Therefore, it is joyful to watch children’s careless play.“