I have just immersed myself in three seasons of Game of Thrones, HBO’s smash hit about the imaginary kingdom of Westeros where seven kingdoms are at war and a dragon queen seeks to claim the Iron Throne.

More than any show in recent memory, this show delves into the stereotypes and caricatures of bastards, or those who are not born properly. They are the outcomes of illegitimate dalliances by rich lords with low-born ladies. In the series, characters frequently use the word bastard like a curse, almost as if it were the worst insult imaginable in a world where true lineage determines everything.

One of history’s most famous bastards, T.E. Lawrence (Lawrence of Arabia).

One etymological reference I found notes the word’s French lineage referring to: “Illegitimate child,” from old French bastard (modern French bâtard), “acknowledged child of a nobleman by a woman other than his wife,” probably from fils de bast “packsaddle son,” meaning a child conceived on an improvised bed (saddles often doubled as beds while traveling), with pejorative ending -art. The definition further notes, “Alternative possibly is that the word is from proto-Germanic banstiz “barn,” equally suggestive of low origin.” In other words, these are really low-down … well … bastards.

As a bastard myself, born from an encounter not blessed by marriage, from a low house on my birth mother’s side, I naturally am fond of the world where bastards romp all over the screen, causing mayhem, murder, and wickedly fun adventure. Five central bastard characters stand out in this epic and now globally popular film tale, adapted from George R.R. Martin’s popular A Song of Fire and Ice fantasy series.

So let us take a look at these imaginary bastards—all guys by the way—and see how they nicely fulfill the typical stereotypes that define our well-entrenched fears and paranoia around children who just happened to be born outside of marriage. (Note all pictures are referenced from online sources, and the use is intended to be fair comment and criticism of the show and its characters, and most of all its obsession with the stereotype of a bastard.) 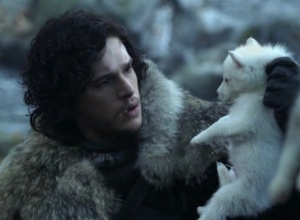 The show pivots around one decent guy. He is the noble bastard, Jon Snow, the son of Eddard Stark, that way-too-easily murdered king of Winterfell. Jon is the “good bastard.” He is handsome, strong, and fearless. He only kills when he has to, and when he does, Jon is like a badass gunslinger of the old West. He swings to kill. Most of the time he is killing really bad people, like traitorous Night’s Watch renegades, marauding wildings wanting to pillage south of the ice wall, and cannibal baddies. He is the prototypical hero who is being tested on a journey, learning to lead and trying save humanity from undead white walkers and uncivilized wildings. Jon is the type of bastard teen girls are allowed to swoon over, cause, really, he is the son of a good king who was ignored by his mom and destined to be a lord one day. No surprise his dire wolf is white, and named Ghost, a pure creature. 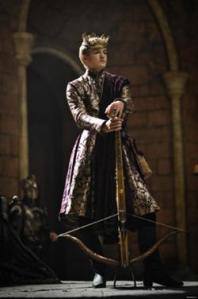 Jon’s opposite sits on the Iron Throne for two seasons and a few more episodes. Hailing from the rival house, Lannister, King Joffrey Baratheon represents the great-abomination-of-nature bastard. A blond-haired beast, sniveling Joffrey is the illegitimate son of evil Queen Cersei Lannister and her dangerous and twisted twin brother, Jaime Lannister. Joffrey was born out of wedlock, so he is a true bastard. No surprise then he is a veritable monster. He likes to torture and shoot prostitutes with crossbows, order random killings of people for laughs at court, commit regicide that launches a bloody war, and be a general prick of the highest order. He is your classic bastard of your royal dreams of noble decadence. See, look what happens if you sleep with your brother or sister. You get a mentally deranged bastard who will destroy civilization as we know it. 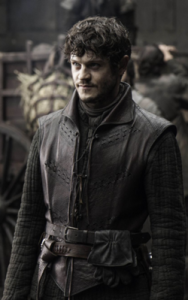 Another vile bastard of the series actually competes for the worst of them all title, Ramsay Bolton. This extremely efficient and misogynistic murderer is the illegitimate son of the treacherous lord Roose Bolton, who during the infamous Red Wedding episode in Season 3 murders Jon Snow’s noble brother Robb Stark, the heir to Winterfell and failed and not-so-clever revolutionary. Ramsay is mainly shown in the series as a half-crazy, psychotic, sociopathic sadist who commits atrocities and torture for fun. Most of his sadism is directed at a lord’s son whom he castrates, Theon Greyjoy. All Poor Ramsay wants is the love of his murderous and duplicitous father, but Roose plays Ramsay like a cheap ukulele. You cannot treat a bastard like a real person, particularly if you are important. Ramsay is the bastard of the your nightmares and the kind that lives up to the word bastard’s many associations with absolute horror and evil. 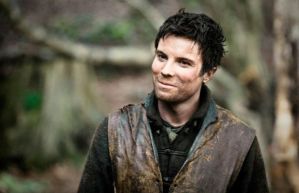 Gendry Baratheon, the kindly and talented King’s Landing blacksmith, is the bastard son of the overweight, whoring, and soon-to-die King Robert Baratheon. Robert spent a lot of time in power using his influence to bed and likely rape women, producing a number of illegitimate heirs who posed an existential threat to the false King Joffrey once that little masochist has Eddard murdered in public and took power for good. Gendry spends most the series on the run, trying to avoid the mass murder of innocent bastards that Joffrey ordered in Season 1. Not quite a “noble bastard” like Jon, he is the lovable bastard you would like to hire in a growing startup cause you know he will not double cross you and flee to your competitor with company secrets. He might even be good enough for your daughter, except he has got that damn bastard thing in his lineage. We last see Gendry in Season 3 rowing away from the power-crazed Stannis Baratheon, who wanted him burned alive—a fitting end for many a bastard. 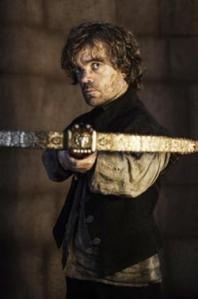 The final bastard of the show is our ceremonial bastard, the Imp and none other than Tyrion Lannister. Tyrion calls himself an honorary bastard for having the misfortune of being born a dwarf. As a bastard in his dad’s eyes, and this is a tyrannical dad too, Tyrion is always prey to his affections for misfits, fellow bastards like Jon, and broken things. As a bastard you can never be expected to be the best, and Tyrion fulfill’s his bastard’s destiny through alcohol fueled binges, sleeping with multiple prostitutes, killing his mistress with his bare hands, and in the act of ultimate rage against his own kin, slaying his mean father, Tywin Lannister, in the crapper with a crossbow. Now that is a true murder only a bastard is capable of executing. Who else could pull off the hit in the center of power in all of Westeros, in the sacredness of the privy? It had to be a bastard. Even after a double homicide the night of his prison break, we are left with twisted emotions what to feel about a bastard. After all he was born a dwarf and falsely accused of poisoning Joffrey. His mistress dumped him for his old man. They deserved to die, right? Money and influence, in the end, could not save the honorary bastard, who has to flee a castle locked in a crate.