“The only stories that matter are the ones we tell ourselves.” I bet you have heard that one before. It is a living, breathing idea that permeates the blogosphere like oxygen. The idea is also rooted in so-called positive psychology, whose adherents include Dr. Martin Seligman, who has written pop psychology books such as Learned Optimism.

In fact the American nation is built on a myth of self-made individuals writing their own narratives and reinventing themselves, regardless of what the facts may say. The power of the myth and the power of the story trump irritating details. History, as the old saying goes, is always written by the winners. 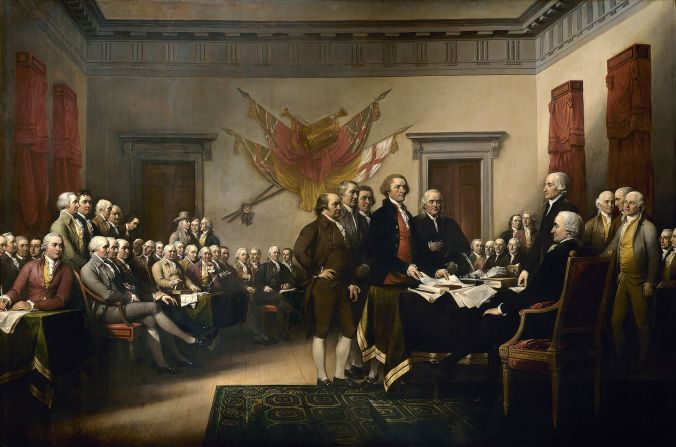 Radical revolutionaries, America’s founding fathers, slaveholders and capitalists, brilliant leaders who sought to create a more perfect union? What story is the one that matters? “Declaration of Independence” by John Trumbull. Licensed under Public Domain via Wikimedia Commons.

I think there is a great deal of truth to this idea. As a former and sometimes frustrated reporter, I struggled to ensure my facts were 100 percent accurate. I wanted truth to defeat the fabrications of bureaucracies that did not want to reveal their poor stewardship of the public trust or criminals who would swear they had nothing to do with crimes for which they were charged. That was not their story.

It was clear from my personal experience, not to mention research, people who are masters at this art believe their stories to be the only truth that matters, facts be damned.

Today I found numerous examples of this concept percolating on multiple blogs.

You also can buy books like one titled The Stories We Tell Ourselves, which you likely guessed is a self-help psychology book you can buy online.

No doubt all of us have stories for ourselves, our friends, our coworkers, our spouses, and strangers. The narrative we choose to believe likely reveals more about our character than we are comfortable admitting. Perhaps what matters as much as the narrative are the intentions driving the choice of stories. Those truly are ours alone to own when we go about our storytelling, especially to ourselves.