Tonight, I walked by two fast food franchises that were closing down for the night around 9:30 p.m. One was a subway sandwich place, the other an ice cream parlor. Their brand names are not important. Inside, shutting things down, three young workers in their teens were hard at work.

Behind the glass at the ice cream shop, I saw two young women wiping down the metal fixtures, sweeping, and ensuring it was sanitary and clean for the next day. One of the those women met my gaze and smiled. She was energetic, attractive, and positive. I smiled back. Next door, a young man, who I think was about 17, was mopping the linoleum floor with an old-fashion slop mop, like the ones I used to use when I was around his age. He looked up, but he went quickly back to his task at hand. He looked like he was ready to leave.

Wow, what a flood of memories that brought back to me. I cannot remember how many times I “closed down the shop,” when I worked in the early 1980s at a Kentucky Fried Chicken outlet just outside St. Louis. 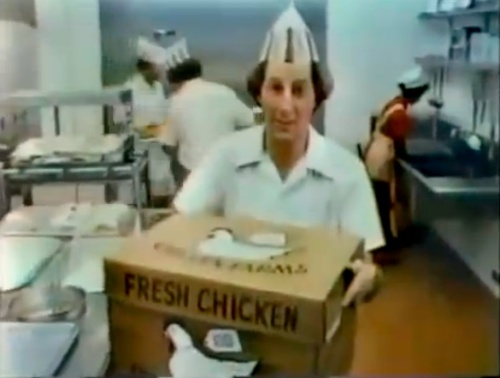 I wore a hat like that, and shirt like that, and likely had my hair even longer. And, yes, I used to haul boxes of frozen chicken in and out of the giant freezer to prep the chicken for cooking.

I was 15 years old—at that time working illegally under the allowable 16 years of age minimum. My job involved cooking batches of factory raised chickens–or rather the edible parts of chickens, soaking them in “special sauces,” covering them special flour, and then deep-frying them in a giant vat of hot oil for the required time til the buzzer went off. That was the “extra crispy” chicken. The “Colonel’s Special Recipe” involved pressure cooking the bird pieces in a giant, and I thought, very dangerous machine. Or, worse, I had to do dishes, cleaning oil-slimed metal cooking ware and trays until my fingers puckered from the chemical cleaners.

Each night, the oil had to be drained and filtered to capture the chicken and fried coating bits, and, when the oil was too dirty to cook another batch, recycled. This meant hauling large metal containers of burning hot oil to a recycling container out back. Often hot oil burned my arms and face. I smelled like the Colonel’s recipes even the next day after a shower. I looked like hell coming home: greasy, physically exhausted, unable to think, and still with homework to do. Getting home was not easy either. I either biked home five to six miles in the dark on some pretty busy roads, or if I was lucky got rides some times from my mom, sister, or a co-worker. This sucked in the rain and cold.

The day after a night shift, I would be unable to think at school. I could not stay awake in classes. I literally zoned out and barely passed intro chemistry. The teacher, a good guy, suggested I might want to quit my job when he noticed me sleeping in class on the desk. I think I was working about 15-25 hours a week, depending on the schedule. Finally, after five months, I had to quit. I literally was going to start bombing my sophomore year classes, or keep up the routine. It was incredibly hard to give up my only source of income, as I had to rely entirely on my job to buy my own clothes and pay for all of my expenses outside of food my mom bought at home.

I hated, hated cooking this industrial food for this employer. To this day, I cannot eat fried chicken.

Making matters worse, during that point in my life, I was probably smoking a pack of cigarettes a day, and blowing up in smoke, literally, a chunk of my measly $3.15 an hour pay. (I quit for good later that year, and never looked back.)

I think I was smart enough to know that the second-degree burns that scarred my arm one night were the signal to escape the chicken shack as quickly as possible, which I did. Though my next job paid less, slightly below minimum wage, it at least gave me more stability, and I only had to work two or three nights a week, and all day Saturday. I at least could find the balance with crappy job and school without the risk of injury at the Colonel’s place, which I called K-Y Fry.

And all of this flashed through my head when I gazed into that young woman’s smiling face. I wondered where she was at in life. Finishing high school, or on track for a GED? She did not look older than 18. Did she have to work to help support her family? Did she envision a better next job, if she could get the skills she needed to move on from the world of dishing out ice cream cones and wiping down the bathroom? I do not know. But, I hope so.

I would never wish my own fast food experience on anyone. Even though I learned how to hold my own doing hard labor, I knew that I could get easily trapped and not move up the income ladder if I did not succeed in school. Maybe I did get lucky. Maybe I found just the right balance and was smart enough to know that this life in fast food America was a pit.

Still, I never forgot where I came from. That is why I always give anyone who works in these ubiquitous food sweat shops more than a little courtesy and respect. They earn it, every day.