Charles Dickens’ acclaimed masterpiece of redemption, A Christmas Carol, remains my favorite piece of fiction. It seems as if it never goes out of style. Everyone who admires great storytelling find virtues in Dickens’ story of how a miserly old businessman, Ebenezer Scrooge, finds his humanity one cold Christmas night when visited the ghost of his former business partner, Jacob Marley and the Ghosts of Christmas Past, Present, and Future. 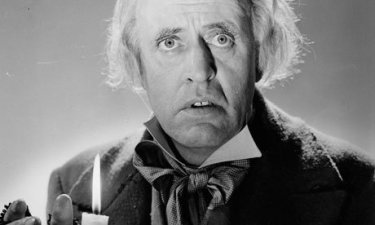 A Christmas Carol works equally well as a play adaptation of the novella. On the stage and page, it tells both the story of a real time and place when there was great income inequality and poverty in England, and a universal tale of a man realizing he has squandered his soul in the pursuit of profit at the expense of the people and society around him. That narrative is as suited for today as it was when Dickens first published his celebrated work in December 1843.

“You only have to look around our society and everything he wrote about in the 1840s is still relevant …,” says Dickens scholar Claire Tomalin. Scrooge also remains to this day Dickens’ most beloved character, likely because of his universality to all people, everywhere.

As a play for the stage, when done in the hands of even half-competent actors, the story stirs up emotions that pull at the hearts of people of all ages, from the very young to very old. I have seen all ages at every production I have attended from Anchorage to St. Louis and places in between—everyone can find something in this ghost story. As of this year’s staging, I have been seeing it performed live for well over 30 years.

In  less than two hours, stage adaptations of A Christmas Carol let an audience follow one man’s full life from a lonely school boy to a happy apprentice to a failed husband to a successful but wretched businessman. At the end of his life, our unlovable Scrooge is a miserable babbler who eats gruel alone on Christmas Eve with no one to share life’s journey.

The scenes of Scrooge’s loneliness evoke the strongest emotions, for me at least. It makes me think of the struggles so many people go through, coping with life’s challenges at every stage of the journey as well as mental illness and the loss of loves past. Even in his moments of cruelty, it is hard to not feel empathy for our greedy protagonist forced to confront the meaning of his life and of life itself on this most famous of ghostly nights.

Dickens’ genius is how he forces the audience to find an unlikeable person likeable. That challenge is made all the harder by the brilliance of Dickens’ language. 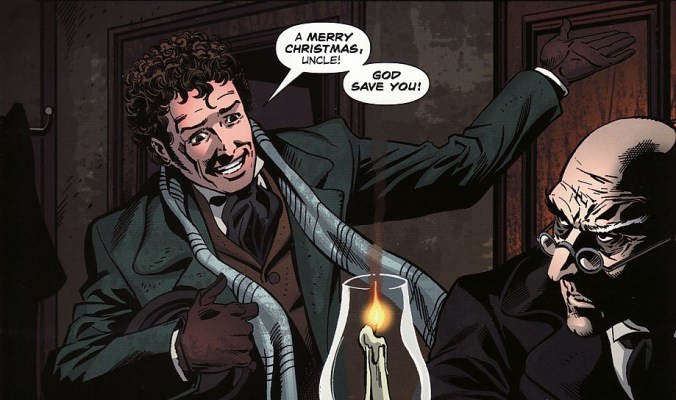 A scene from the Classical Comics graphic novel interpretation of A Christmas Carol.

Writes Dickens: “But he was a tight-fisted hand at the grindstone, Scrooge! a squeezing, wrenching, grasping, scraping, clutching, covetous, old sinner! Hard and sharp as flint, from which no steel had ever struck out generous fire; secret, and self-contained, and solitary as an oyster.”

Why should anyone like Scrooge? Why should we stick up for such cruel people and defend their behavior? Why shouldn’t we speak critically of people like him, in front of them or when they are not close by?

What I Took Away Watching A Christmas Carol this Year.

I just saw a production of A Christmas Carol, put on by the Portland Playhouse. The play is one that facility’s yearly stalwarts. It works beautifully because the converted wooden church is a cozy, compressed space. The stage sits below two seating areas that rise above where the actors make magic with the hand of the production crew.

Fake smoke, authentic costumes, and expert lighting evoke far-off London, at a time when orphaned children, criminals, destitute persons and contagious disease were common in the Victorian era mega city. It was a world Dickens knew too well as an insomniac and prodigious walker, who observed every shade of humanity and its filth on London’s streets at night. 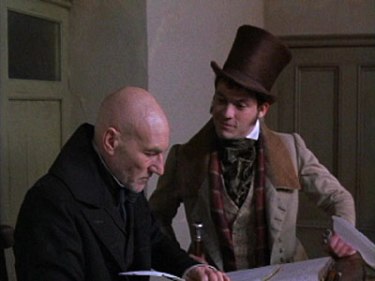 This year I was drawn to a part of the story I may have been overlooking in past years. I loved the way Dickens developed the plot that ultimately forces Scrooge to see himself. Poor Scrooge is allowed to eavesdrop on how others truly think and speak of him courtesy of the Ghosts of Christmas Present and Future. This is the test most of us may dread the most, to know the bare and cruel truth how our peers think of us and how we are measured in this world.

Scrooge is taken by the Ghost of Christmas Present to the home of his estranged nephew, Fred, perhaps the one man who has the greatest space in his heart for his embittered uncle. While others speak unkindly of Scrooge, Fred stands up for him: “‘He’s a comical old fellow,’ said Scrooge’s nephew, ‘that’s the truth: and not so pleasant as he might be. However, his offences carry their own punishment, and I have nothing to say against him.'”

I thought more deeply about these scenes this year because I think of the tests we all face, nearly every day. Are we authentic when others are not in earshot? Just how would each of us fare, were spirits to take a colleague, coworker, or friend into our homes and hear our private conversations?

What would we sound like speaking of the flaws and deeds of another? Would we be charitable to those we disagree with, even dislike, like Scrooge? Would we belittle others because they are not listening? Or would we be Fred, who wishes his mean uncle no ill will even as others chide the miser? 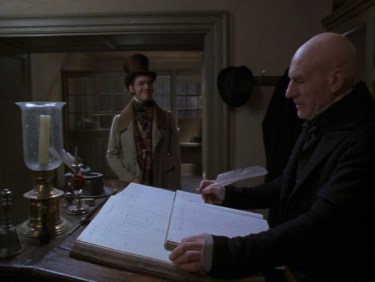 Fred is the only person in A Christmas Carol who defends his uncle, Scrooge.

This test is one we face everyday, because it is a true measure of our characters. Do we change our songs in the company of others, or do we hold true? Do we prevent others from saying bad things about people not in our company to garner laughter or an advantage at their expense?

I think Dickens was keenly aware of this weakness, this utterly human shortcoming, which he put on display as he tests Scrooge and forces him to confront the truth that his life may have no meaning because of the path he took. There is so much here to unpack, to cry at, to laugh at. I did watching the play, as usual.

This time, during the play, I kept thinking about two people I know.

One is a coworker, who changes their character depending on the company they are with. One moment it is warm and polite, the next it is cruel and critical, and all for momentary and illusory gain that brings nothing. The other person I thought of is one of my best friends, who I admire more than he knows. The entire time I have known him I have never seen him once speak ill of others, even with those he finds problems with. When I speak to him about my own worries, I find that I can no longer hold even my momentary grudges against people who have been unfair to me. He wrings my bitterness out of me.

Your Mission This Christmas and Beyond

So, my friends, this year, I challenge you to have the courage that Scrooge had in the hands of his ghostly ambassadors. When you are in the company of others, and you hear a nasty thing said, do not let that moment pass. Imagine  if the slighted party, whomever it may be, is watching in the room, like Scrooge was as an invisible witness.

Show goodwill. Speak kindly. If you do this from your heart, you might never have to be like Scrooge, alone and unhappy in his older years, realizing so late he had wasted so much of his life.

Would it not be better to be like Fred, who never gave up on his uncle.

As Dickens writes, upon seeing the changed Scrooge in his home on Christmas day, Fred embraces him: “Let him in! It is a mercy he didn’t shake his arm off. He was at home in five minutes. Nothing could be heartier. … Wonderful party, wonderful games, wonderful unanimity, wonderful happiness!”