The writer Robert Green, author of many books on human behavior, shared these words that make me think of Mom. Green wrote: “But despite what you may think, good luck is more dangerous than bad luck. Bad luck teaches valuable lessons in patience, timing, and the need to be prepared for the worst; good luck deludes you … making you think your brilliance will carry you through. Your fortune will inevitably turn, and when it does you will be completely unprepared.”

Like all of us, Mom had good and bad luck. Unlike many, she always learned from her misfortune and knew exactly when she finally found the tide turning. And she also knew good luck simply didn’t happen. She worked hard for it.

Mom was a child of the Depression and the daughter of an immigrant, who was fortunate to leave Germany before a much worse misfortune befell her homeland. Those immigrant lessons were passed down to Mom from her mother.

Being a child of that era, it shaped Mom and her generation. She spent her early years in a working class community of New Jersey—something that I think taught her about working hard and knowing that others around you could be less fortunate. She never forgot this her whole life.

Mom also grew up in the shadow of a great city, the epicenter of culture, and finance. The Big Apple’s glow could be a draw to anyone, particularly a woman like my mom who had an abundance of great looks. Those looks, however, never went to her head.

Mom attended Bronxville in NY (Concordia College, Bronxville, today) to pursue professional studies that the sexist workplace of the 1950s offered single women of lesser means. She made lifelong friends there. One became the godmother of one of her children (me). They were called the “Triple Threat.” 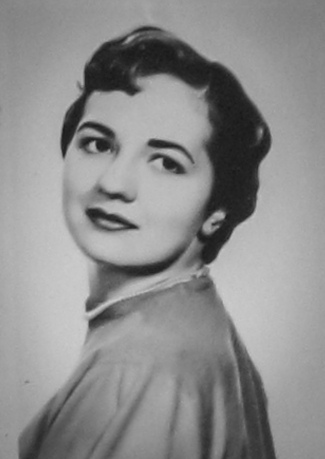 Mom, when she would turn heads during her college years in New York.

I don’t know the full story how Mom moved from greater New York to soggy Saginaw, MI in the mid-1950s. My guess is she needed work. When she had to work, she would always “crack on.” I learned this from her early on.

In 1958, she met her first husband. They moved to Detroit. They adopted my sister and I and raised a family. They moved to Boston for a spell in late 1965 and then to Clayton, Missouri, in late 1966. The pair divorced in 1973 and she re-entered the workforce as a teacher, eventually in the St. Louis Public School System and the University City Public Schools system.

She was a lifelong teacher, completing her career in University City Public Schools as a reading specialist. She devoted her professional life to the wellbeing of young people, many of whom were lower income, minority, and had higher needs.

Despite Mom’s great looks, she was remarkably grounded in the world around her, in people, her church, her community, and her family.

She was profoundly spiritual. She didn’t need to tell the world about her faith. It resided in her. She was devoted in the fullest Christian sense to her Christian identity and the congregations she belonged to. She dragged me and my sister to church. She knew better than we did why our nearby Lutheran church would be good for us. She was right. Her faith stayed with her to her last days.

Mom always had style. I never saw my mom look shabby. It’s the style the world saw on the show Mad Men, of women of that era. Mom always carried herself this way.

Mom also had an artistic side. Her creative outlets included fixing furniture, making beautiful outfits with her hands by sewing. She could throw herself into project and be unmoved by distractions. The house she purchased together with her second husband became an art gallery. They both loved great art and had impeccable taste.

Mom was very smart—like all her family members. She loved crossword puzzles, which she did for decades. I could never keep up with her when she’d work them out on the kitchen table.

Mom managed the impossible: navigating a divorce, reinventing herself, raising two kids, switching jobs, buying a home on a teacher’s salary without any help. And then, with two kids in tow, she found her lifelong soul mate, who she married in 1983.

Mom may have felt she didn’t see the world, but she did.

With her second husband, they travelled nearly everywhere in the United States and Canada. She even travelled nearly 50 miles up a dirt road outside of Cordova, Alaska, in the pouring rain, just to see a glacier and laugh at how beautiful and crazy that was.

Author, Rudy Owens, and Mom, about four months before she finally succombed to Alzheimer’s disease.

She was a great cook. I loved her Christmas stollen and cookies. She taught me this art. She kept learning new recipes and growing with her expanding love of food outside of her St. Louis world.

Through thick and thin, Mom was devoted to my sister and remained generous to her. Mom was always about doing.

Mom was tough. Her friend from college shared some stories about that with me, and I can see that throughout her long life. I call it grit. It’s the virtue I respect the most in people who matter.

I think all that she confronted in life–stuff that might bend or break others–did not push my mom down.

She could weather storms because she always knew something good was ahead.

Mom during one her several moves in the mid-1960s

Mom was right, of course, and her marriage to her second husband was the highlight of her life.

The thing she said the most to me, for the last seven years of her life, when her illness took hold, was, “I have the best husband in the whole world.” I would always say: “I know mom. He’s a great guy.” She was would always laugh and smile. We had this conversation literally hundreds of times. She last said it to me on Thanksgiving Day, on the phone. I said, “Yup, mom. You are a lucky woman.”

Mom was the best friend and loving wife of her second husband for 37 years. She welcomed his family as her own and devoted herself to their shared relations. In the end, her marriage was the enduring happiness and the good luck that came in her life. She earned it and knew how to live it well, only the way those who know the fickleness of fortuna can.

Mom, I salute your memory. Thanks for making us richer.

Recently, when picking out a tie for a formal event, I was overcome with sadness. So many of the ties are gifts from my mom. She always knew what I might need to look professional, and she kept at that for decades. She was mostly right all of the time. She knew my taste—basic but proper. Now, she can’t even remember a conversation that happened five minutes ago. I wasn’t ready for that. I still feel that well of feeling when I see my ties hanging in my closet. It’s not just a tie. It’s a connection to a relationship that has been disappearing now for years, and that journey is not over.

In the more than the three decades since I graduated from college in Portland, I have maintained a good friendship with classmate of mine. He now lives in southern California. I have been visiting him periodically in Utah and there now for nearly 30 years.

Rudy Owens, on the far left, and my friend are among this group of Reed College students shown here in 1987, in front of the Reed College Library.

As we have aged together, we have encountered different and also similar challenges. I stayed single. I moved to more locations. He got married,  got divorced, raised his daughter, became a river guide, succeeded professionally in a grander way than me, and always stayed true to his curious, creative self.

Though we were raised in very different circumstances—him in a Jewish family in the West, and me in a Lutheran family with a single mother in the Midwest—we had more in common than I would have thought possible when we first got to know each other at our college library steps on long evenings.

Last night we caught up on the phone. I was sharing my feelings of loss concerning people I am close too, including my mother. She is still mostly well, but her issues are ones I will not share in detail here. My friend also shared stories of his mother, who has passed away. 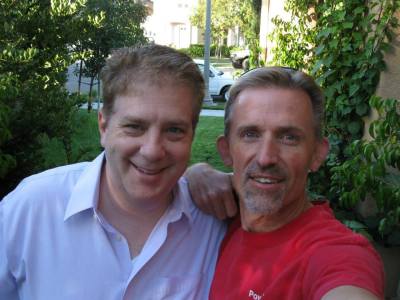 Taken in 2014 in southern California during one of the greatest trips of my life.

During that call, we experienced a moment of understanding that transcended our distance of nearly 1,500 miles and the time we have spent not seeing each other in person the past few years. I learned things about him I did not know. I also shared things about myself I seldom share with others.

I am by nature private and stoic, and I have learned how to control my negative emotions and also my public displays of sadness or anger. I also realized during our talk about life and its inevitable end with death that my embrace of existentialism has given me the ability to confront these challenges I face more clearly.

I told my friend that in suffering, we really can find purpose and meaning. And whatever I did as a result of these circumstances, I would be making choices to respond to the challenges before me.  Those actions would be mine alone, and freely chosen. I was mostly telling myself these points, as I considered those actions yet to come with my mum.

That is pure Viktor Frankl. But it is also how I can face up to what is inevitable on the road ahead. I shared these thoughts with my friend, and he listened in the right way. He did not need to do much other than let me know he listened.

Mostly, I felt relieved to know I could unload to a friend and share my fears and also my resolve. Facing the world alone is not easy for anyone. Maybe it will be easier because I will have friends there to listen when the moment of the void arrives in full force.